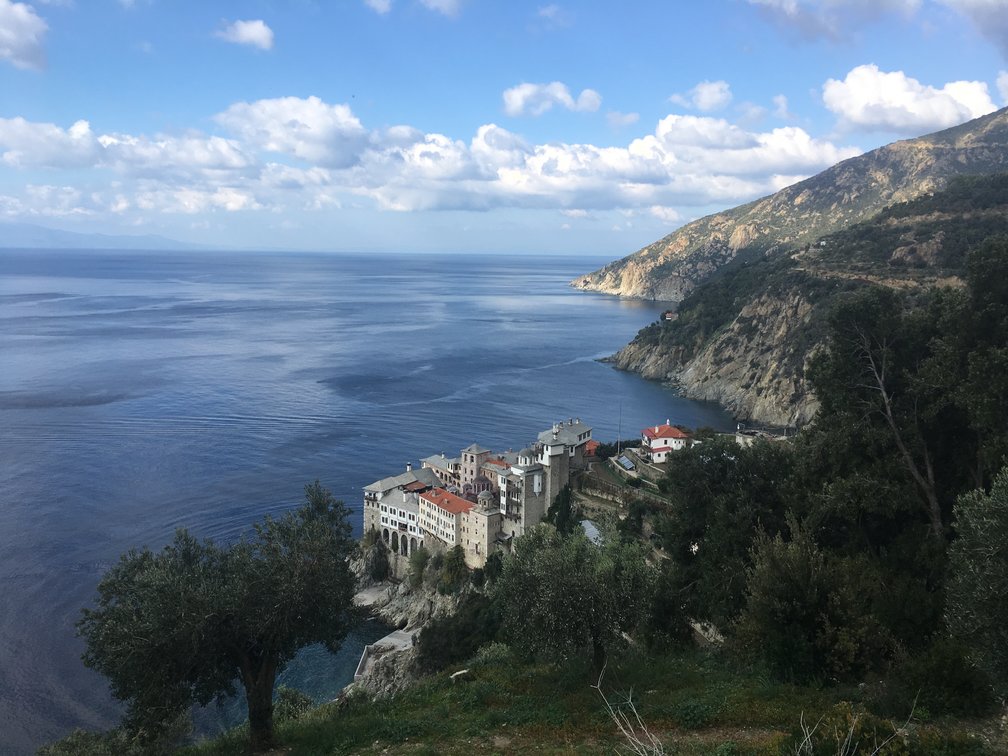 Tucked away on Greece’s rugged north Aegean coast lies a place seemingly frozen in time, where men lead simple lives much the same as they have for the past thousand years. It is a rocky, narrow peninsula covered in wooded valleys and terraced farms that comes to an abrupt end at a dramatic 6000-foot peak – the eponymous Mount Athos.

There are many things that set this place apart from the world’s many bucolic hinterlands that time seems to have left behind. Here, the men live in a conscious, strictly self-enforced isolation. No women have set foot on the peninsula for over a thousand years, and even female animals are removed upon their discovery. Non-resident males must apply for a permit before boarding a ferry to the peninsula. Mt Athos, or Agion Oros (Holy Mountain), is the exclusive domain of 20 Orthodox monasteries and their resident monks, as well as a smattering of hermits and wandering ascetics all of whom, have “retired” from the world. 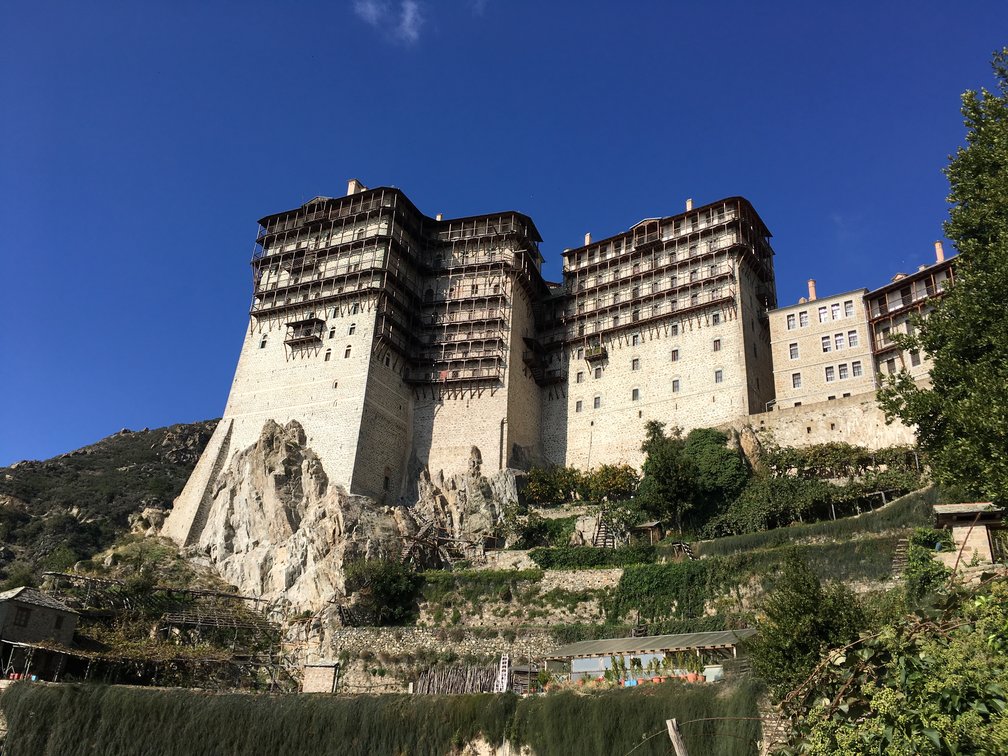 In a sense, Mt Athos is the world’s oldest retirement community. The first and oldest monastery there today, Megistri Lavra, was founded in 963 CE, and there are archeological remains which suggest that there were monastic communities on the peninsula even earlier (a point of controversy among the monks). Those who choose to retire to Mt Athos, Athos’ “retirees”, may do so at any age. They settle in a monastery or perhaps one of the smaller monastic communities known as skiti or kellí. There, they live out the remainder of their days free of charge with three square meals a day (except during fasts!), a bed, and a roof over their head. The accommodation is stunning. Perched high on rocky cliffs or forested hills, Athos’ monasteries offer unparalleled views over the north Aegean, the sort beachgoers pay hundreds of euros for elsewhere along the coast.

Despite the scenery and free accommodation, a monk’s life is not one of leisure. In order to become a monk in the first place, one must first find a monk within one of the monasteries to take responsibility for his “spiritual health.” Once a spiritual father has accepted this responsibility the novitiate must pass through a rigorous catechism, or Orthodox education, to ensure his beliefs and practice are proper and well-informed. Then the novitiate will stay on in a temporary, trial-period capacity, and generally be stuck with the worst jobs such as cleaning the bathrooms. Then, when the novitiate has proven himself and been accepted by the monastery authorities he can be tonsured as a monk. Yet still, all monks must work to earn their keep. Some work in the gardens, others cook and clean, while still others work in an entirely spiritual capacity, spending their days in prayer.

However, some monks take up special vocations, involving a skilled craft. Father Dorian, an English-born Greek monk, is a book-binder at one of the monasteries. He works in a well-equipped and surprisingly modern studio from where he has a spectacular view over the monastery’s terraced gardens to the sea. He spends his days repairing old books sent to him from around the peninsula as well as assembling new books written by the monastery’s holy fathers. Before becoming an Athonite monk, Father Dorian knew nothing about bookbinding. He learned from his own mentor and is now in the process of passing his knowledge on to a novitiate, a Spanish convert from Buddhism. In another monastery, an English convert-turned-monk named Father Makarios is an iconographer. He paints highly stylized portraits of the Virgin Mary, Jesus, and the saints. Though he may have painted before becoming a monk, Father Makarios had to learn the intricacies of depicting his subject matter within the particular framework of Orthodox religious art.

Though it may seem at first glance that the “retirees” of Mt Athos do not have much in common with those of us who retire without renouncing the world, they do in fact have some valuable lessons to share with us.

With thanks to Mt. Athos visitor, Peter Minnium Jr, for this guest post.