The Ebbs and Flows of Financing Retirement 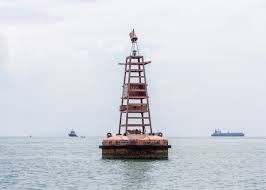 “Race you to the buoy,” my daughter, Judy, shouted. She had thrown down the gauntlet and was now engaged with my husband, Peter, in a swim contest. They decided on a timed race because Judy couldn’t trust her father not to pull her foot as he swam behind her. I timed them from the Cape May, NJ beach with a smile, wondering who would emerge victorious from the wavy ocean; it was a fairly matched challenge as Judy is an accomplished middle school swimmer while my husband wins in the size and experience areas.

Even though I was on vacation, I couldn’t help but think about two of my clients while watching the race!  The two retired clients, Bill and Beth, had the same goals and simple objective—to make it through their retirement without running out of money. Like my husband and daughter, Bill and Beth had a staggered start. Bill retired first and Beth retired 20 years later.

My husband reminded me of Bill, the first retiree, as he started out towards the buoy. He had a strong, slow stroke. When he was almost at the finish, Judy took to the water. Unfortunately, she wasn’t paying attention as a giant wave approached. The groundswell knocked Judy off her feet and spun her around in the surf just as she started her leg of the race. She struggled to right herself and catch her breath. Finally she was on her way to the buoy.

Judy reminded me of my client Beth, who retired 20 years later. Just as the wave stunned Judy at the start of her race, so too did a steep stock market slide surprise Beth as she initiated her retirement.  While she didn’t panic, Beth still needed to withdraw from her portfolio for living expenses.

The wave hit my husband too, but since he was well underway he just powered though it. It took only a few more strokes before he reached the buoy in a total of 2 minutes. Similarly, the stock market tumble shocked Bill, but he weathered the storm and only had a few more years of retirement left anyway.

Despite Judy’s strong, quick stroke she had trouble maintaining her pace after her initial set back. She was winded and just couldn’t seem to make up for her start from behind. Much to her chagrin she lost to her father by finishing in 2:30. Beth also had a tough time bouncing back from her difficult start. Despite the fact that the market experienced positive returns after the initial disaster, Beth’s portfolio was dwindling and could not make up for her past loss. 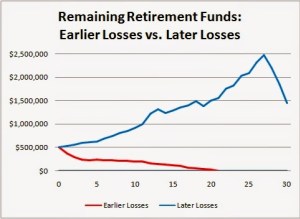 In the financial planning world, this is referred to as the “sequence of returns risk.”  Even though Bill and Beth both suffered the same market incident and return, their investment portfolios were affected quite differently due to the distinct retirement stages in which each experienced the downturn. By the time Bill (and my husband Peter) were hit by their respective waves, they had made significant progress towards their goals and were able to make it through the turmoil successfully, partly because they only had a short way to go.  On the other hand, Beth (and my daughter Judy) were hit early on in their race and, despite their strong continued efforts, they were not able to overcome their obstacles in the same way as Bill and Peter.

Unfortunately, we can’t accurately predict what the markets will do when you retire—when you will be hit by a wave. You could either end up winners like Bill and Peter or struggle from behind like Beth and Judy.  The good news is that you can hedge your exposure to sequence of returns risk. Look out for my next post which will elaborate on this topic. As for Judy, don’t worry—she crushed her father in a beach foot race shortly after!