How to Read the Panicky Market 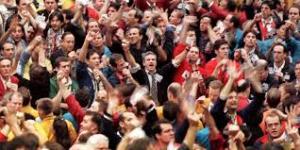 Some of the most entertaining times to be a long-term investor are those periods when short-term investors are looking over their shoulders for an excuse to sell. They’re convinced that the market is going to go down before they can get out, and so they jump on any bad news that comes across their Bloomberg screen.

And, of course, Friday was a marvelous time to see this in action. With all the economic drama playing out in the world, there were plenty of opportunities to panic. The Greek Prime Minister has resigned! Sell! China devalued its currency a few days ago by 2%! Head for the hills! Chinese stocks are tanking yet again! Get out of American stocks while you can! The Fed might raise short-term interest rates from zero to very nearly zero! It’s the end of the world!

Of course, a sober analyst might wonder whether a change in governance in a country whose GDP is a little less than half the market capitalization of Apple Computer Corp. is really going to move the needle on the value of U.S. stocks—especially now that Greece seems to have gotten the bailout it needs to stay in the Eurozone. Chinese speculators are surely feeling pain as the Shanghai Composite Index goes into free-fall, but most U.S. investors are prohibited from investing in this tanking market. If the market value of PetroChina, China Petroleum & Chemical and China Merchants Bank are less valuable today than they were a week or a month ago, does that mean that one should abandon U.S. stocks? Does it mean that American blue chips are somehow less valuable?

What makes this dynamic entertaining—and sometimes scary—is the enhanced volatility around very little actual movement. You see the market jump higher and faster, lower and faster, but generally returning to the starting point as people realize a day or two later that the panic was an overreaction, and so was the false exuberance of realizing that the world isn’t going to come to an end just because we’re paying less at the gas pump than we were last year. Despite all the jitters investors have experienced over the past nine months, despite the drop on Friday, the S&P 500 is only down about 4% for the year, and was in positive territory as recently as August 19.

If you want a broader, more rational picture of our current economic situation, read this analysis by a long-term trader who now refers to himself as a “reformed broker” in Fortune magazine: He talks about the “terrible news” that it hasn’t been this cheap to fill your gas tank in over a decade, and business that rely on energy to manufacture their goods are now forced to figure out what to do with the excess capital they’re not spending on fuel.

Oh, but gets worse. American corporations are struggling under the burden of enormous piles of cash they don’t have a use for. They may have no choice but to return some of that money back to shareholders in the form of record dividends. Of course, you read about the risk to corporate profit margins. It seems that unemployment is so low that wages for American workers are going up, and that could raise consumption and demand for products and services.

Meanwhile, contributions to 401(k) and other retirement plans are up dramatically, housing starts and the construction sector are booming, America’s biggest global economic competitor (China) is reeling, and the Federal Reserve might decide that it no longer has to keep short-term interest rates low because the emergency is over and the economy has recovered. The author apologizes (tongue in cheek) for bringing us all this terrible news, but hey, we can always sell our stocks and get out until conditions improve.

Nobody would be surprised if the U.S. stock market suffered a 10% or even a 20% short-term decline, this year, or perhaps next year. But what can you do with that information? Nobody would have been surprised if this had happened at any point in the long bull market that doubled your stock investments, and nobody can predict whether Friday was a signal that the market will take a pause, or if Monday will bring us another wave of short-term euphoria measured mostly in sighs of relief. And if you don’t know when to sell in this jittery market, how will you know when to buy back? 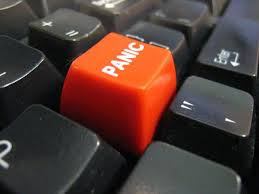 These short-term swings provide entertainment, but very little useful information for a mature investor. If you aren’t entertained by watching people sell in a panic and then panic-buy their way back in when they realize things aren’t as dire as the headlines made them out to be, then you should probably watch a movie instead.

Written by Bob Veres and posted in honor of my husband, who is panicking!