Immigration: The Case for Doing the Opposite of Trump’s Recommendation 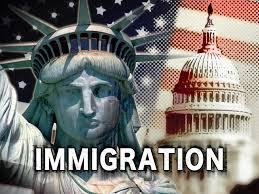 The current debate in U.S. and European politics centers around: how do we strengthen our borders and prevent too many people from entering our prosperous countries? But you might be interested to learn that a number of macroeconomists think that open borders and unlimited immigration might actually provide significant benefits—not just for the people looking for a better life, but also for the people already living in the prosperous nations.

The analysis starts with surveys of immigrants going back to ancient times, and including the people who migrated to the United States as the country was transitioning from a third world backwater to the most powerful nation in the world. The immigrants, almost unanimously, were looking for an opportunity to make a better life for themselves and their families.

When workers move from a poorer country with limited opportunities, harsh regulations, rampant violence and impenetrable social structures, they typically double, triple or even increase tenfold their income, raising total world economic output accordingly. A recent article in the American Economic Association’s Journal of Economic Perspectives has calculated that a world of open borders would double world GDP. The article says that our immigration restrictions are the equivalent of leaving trillion dollar bills on the table.

Meanwhile, opening our borders would function as the biggest poverty alleviation program in history. If the developed world were to increase their immigration flows enough to raise the labor force by just one percent, the additional economic value created would be worth more to the migrants than all of the world’s official foreign aid combined.

But what about the people already living in the country that suddenly opened its borders, either a little bit or a lot? The economists point out that new immigrants often possess skills different from their hosts, and those differences enable workers in both groups to better exploit their special talents and leverage their advantages. The additional GDP provides more tax dollars, more opportunities, more potential buyers of what companies are selling and more output to sell overseas.

The final argument is a moral one. The United States experienced its most rapid expansion and prosperity as it experienced wave after wave of hungry, ambitious immigrants, and their energy created the country we live in today. But now a mixture of religion and politics seems to suggest that we should now refuse others membership in our club. But where does that come from in our religious background? Is there any moral framework—unitarian, libertarian, Christian, Hebrew—that regards people from foreign lands as possessing fewer rights and moral worth than others who have been lucky enough to have been born in the right place at the right time?

The question that the economists are asking us to consider is: are we getting our political debates exactly backwards? It’s an interesting question that almost certainly won’t generate a rational, considered political discussion.